Welcome to the Wiki!

Hey there, and welcome to the So Random Wiki! There are 109 articles and still growing since we were founded in June 2011. The format allows anyone to edit or create a page, a blog, and more! So, edit away! We are thankful to have you and hope you join the Wiki and stay.

If you need any help, contact one of the admins.

So Random! Wikia
The wiki about So Random! that anyone can edit
109 articles since May 2011
Please read the rules before you start editing

So Random! is an American Disney Channel sketch series that premiered on June 5, 2011. It was announced as an independent series after Demi Lovato left the parent series, Sonny with a Chance, to focus on other endeavors. The series stars the other actors of Sonny with a Chance: Tiffany Thornton, Sterling Knight, Brandon Mychal Smith, Doug Brochu and Allisyn Ashley Arm as well as other featured actors that recur in the series. The series premiere was watched by 4.1 million viewers.

Poll of the Month

Selena Gomez and the Scene

So Random! News
There will be a new episode of So Random! premiering this Saturday!
Featured Character 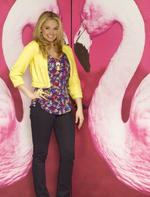 Tawni Hart likes to be the center of attention. She is obsessed with fashion, her looks, her style, and hair and becomes upset if she does not get her way.